The resurrected, faded star that is Wilton's is proud to welcome a kindred spirit in the incomparable form of Ida Barr.

This former music hall singer used to be quite the shining star, known for her two big hits, Oh You Beautiful Doll and Everybody’s Doin’ It.  Now, she's treading the boards once more, embracing a whole new musical genre which she has christened Slipped Disco or Artificial Hip Hop - as featured on various pirate grime radio stations around London’s East End. To great acclaim, she has launched her new album, Get Old or Die Tryin’, and she invites you to join her for an old fashioned, new wave sing-a-long.  Ida’s going to be mashing up Rhianna with Dan Leno, Omi with Noel Coward and Marie Lloyd with Eminem, whipping you all into a frenzy for her epic rendition of Jerusalem by Will.i.am Blake mashed up with Nicki Minaj.  Believe us, you ain’t heard nothin' like it.

Ida Barr is the creation of Olivier-award winner Christopher Green also known for BBC Radio 4 favourite Tina C. Ida has graced stages at the National Theatre, Tates Modern and Britain and the Barbican, as well as livening up many a variety and comedy night around the globe. She’s appeared in her own series, Artificial Hip Hop, on BBC Radio 4 with special guest, the beatboxer known as Shlomo. 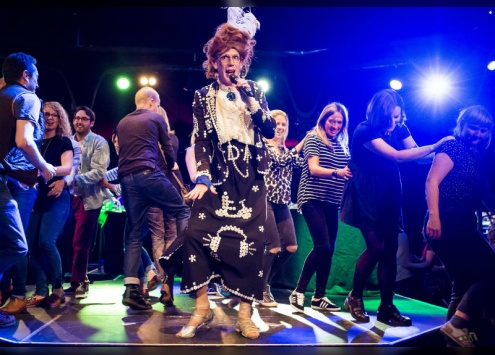 The resurrected, faded star that is Wilton's is proud to welcome back a kindred spirit in the incomparable form of Ida Barr.This former music hall singer used to be quite the shining ...