Hello! I’m James, I’ve just joined Wilton’s as Archives and Interpretation Manager and have been burying myself amongst the 184 boxes that make up the beautifully rehoused Wilton’s archive. I’ve been stumped as to where to start with opening up the treasures we hold; should I start with an early sketch of the hall from 1871? Or campaign documents to save Wilton’s in the 1970s? Or should I begin at today with some of the stunning photography the newly restored spaces have inspired?
Instead I am starting in 1997 and three images from our extensive photography collection that show the exterior of Wilton’s during the acclaimed production of T. S. Eliot’s The Waste Land starring Fiona Shaw.

Why these? They are not the most historic or the most beautiful images we hold but they show Wilton’s at a turning point. After a hundred years serving the community as a music hall then Methodist mission Wilton’s had entered a state of dereliction. Decades of campaigning saved the building from destruction and various proposals were put forward for restoring the building and the area around it after the slum clearances of the 1960s. Wilton’s, far from lying dormant, had been kept alive and became a film star in its own right, appearing in music videos and films throughout the 1980s and 1990s. However The Waste Land put live performance back at the centre of Wilton’s, at once disregarding and embracing its dereliction.
Reviews at the time relished in describing the space; ‘It is cold and smells damp. The paint peels. The gold, papier-maché moulding on the balcony is rotting. You are advised not to lean on it.’  Charles Spence in The Daily Telegraph was less reserved when he noted ‘The loos are breathtakingly squalid’, however he did go on to say ‘Wilton’s is an archetypal London secret, and its abandoned, mysterious atmosphere perfectly suits this elusive, allusive London poem.’ 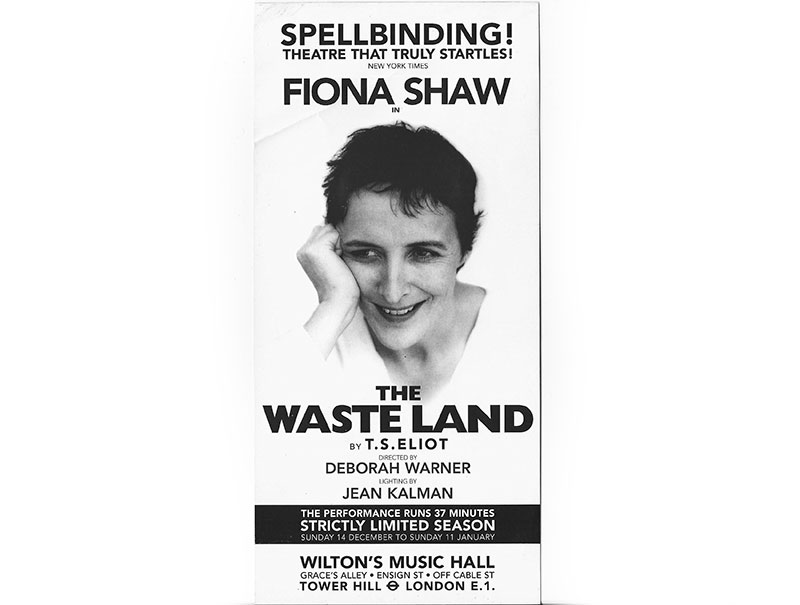 The production proved that the state of the building could be used to its advantage. The photographs show the site boarded up, graffiti-ed, and falling apart, yet despite this unappealing façade The Waste Land pushed ahead and began the long run of productions that make Wilton’s the renowned venue it is today. It prevented Wilton’s becoming a museum, proving that live performance brought the building alive.
It is interesting to see our neighbours under construction on the photograph edge, the pressure to conform to a neat, orderly London encroaching on the site. The joy in the recently completed restoration is the dedication in retaining the sense of history engrained in the walls of the building. Old windows, abandoned staircases and roofs half way up the building abound, Wilton’s wears its scars well. It is this sense of pride in the highest and lowest aspects of its history that drew me to Wilton’s and what sets it apart. The archive, like the building, is a goldmine of stories across all elements of its history that I’m looking forward to sharing with you. Describing The Waste Land Michael Coveney put it well: ‘I experienced rare shudders of contact with the past, and the passing, in both this rare actress and her magical, newly awoken environment.’
Supported by: