Music Hall was the populist entertainment of its day. In a way that film, television and now YouTube and social media have become. Wilton’s itself has met these new eras with notable appearances across film and television. One in particular stands out as particularly appropriate, in 2014 the Muppets came to Wilton’s. 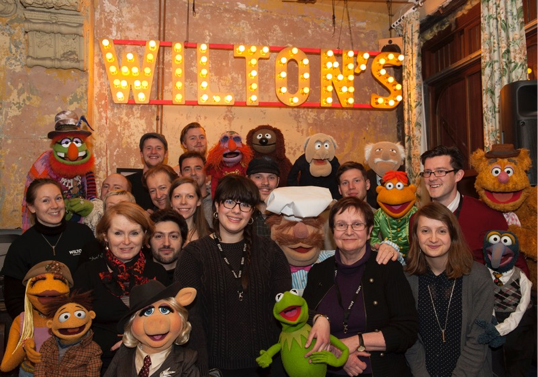 The Muppets, despite being a product of American puppeteer Jim Henson, have a strong music hall heritage. The original show takes place in the Muppet Theatre and follows the tropes of music hall, or vaudeville, with song and dance, comedy and musical acts interspersed with behind the scenes actions of the Muppet management. The ornate stylings of the Muppet Show front of house screen and architecture, especially that of Statler and Waldorf’s heckling box, clearly take their cue from Victorian theatre design.

Just like Wilton’s and music halls at their height, the Muppet Theatre has a long list of acts and performers that have passed across its hallowed stage, with human celebrities the star of each week’s billing.  The anarchic show is (barely) held together by Kermit the Frog, doing his best to imitate John Wilton and maintain an ‘orderly house’.

What cements the Muppets’ direct music hall lineage is their relation to British variety television. The acts typical of the former music hall stage found a new home on British television in the mid-20th century, using the same format of revolving star appearances and individual sketches and musical performances, shows like Morecambe and Wise and the Two Ronnies are the descendants of the music hall. Stars like Tommy Cooper comfortably shifted between stage and screen performance, with little adaptation to his performance. It was Spike Milligan's relationship with Michael Mills that sustained Wilton’s and allowed by minimal repairs for a television special in 1970, which starred none other than Ronnie Baker onstage.

The Muppets, despite filming two pilot episodes, were turned down by all American television networks and it was Lew Grade for ATV, the ITV Midlands franchise, who recognised their genius and backed the programme. The initial Muppet Show run was filmed at Elstree Studios and ran for 5 series from 1976 to 1981, when television variety was at its peak. Henson’s other work Sesame Street, is clearly a product of New York which adds to its unique character. The Muppets reflect the heritage of the British stage and variety disciplines.

It is appropriate that the stage trappings that bore the Muppets television show brought them back to the original stage, on film. Entertainment disciplines have always interconnected and Wilton’s is now fully embedded in this wider landscape.
Supported by: