In memory of Sir Peter Shaffer (1926-2016) this week we look back at our 2006 performance of his seminal work Amadeus. Originally opened at the National Theatre the Broadway transfer won the Tony for best play in 1981 and the film adaptation the best picture Oscar in 1985, not to mention best director, actor, costume, makeup among others; Wilton’s revival with Adam Spiegel Productions had a lot to live up to!

The play documents the jealousy felt by Austrian Court composer Antonio Salieri to the young, vulgar Wolfgang Amadeus Mozart, following his deathbed claims of poisoning Mozart. Told in flashback the play presents a highly fictitious account of the composers’ rivalry and the natural genius of Mozart contrasted to the crippling mediocrity of Salieri. The historical accuracy is almost irrelevant as Shaffer draws a fascinating conflict between two contrasting, captivating but flawed and destructive characters. The play has remained popular and this production was followed by the successful 2007 West End revival of another seminal Shaffer work, Equus.

As the single narrator Salieri is a demanding role and many distinguished actors have given their take over the years. At Wilton’s Matthew Kelly, having recently won the Olivier Award for Of Mice and Men at the Savoy, was commended, 'the always commanding Kelley proves a far less fruity, self-aggrandizing Salieri than some of the ones I have seen over the years’ (Matt Wolf, Theatre.com). As Mozart, Robert Shore of the Metro said, ‘Broadbent meanwhile invests the potty-mouthed prodigy with punky panache.’

Despite the dominance of the two central roles reviews noted the importance of placing musicians on stage, no doubt helped by the renowned acoustics of the hall; ‘the ensemble music-making, under Catherine Jayes’s supervision, that gives this Amadeus its own particular flavour’ (Michael Billington, The Guardian). ‘Doyle, who often casts actors who play instruments too, scores a theatrical coup by making the courtiers into a little musical ensemble who elegantly play sequences from a Mozart serenade and the 29th Symphony, the sounds of which drive Salieri deeper into jealousy’s grasp’ (Nicholas de Jongh, Evening Standard). 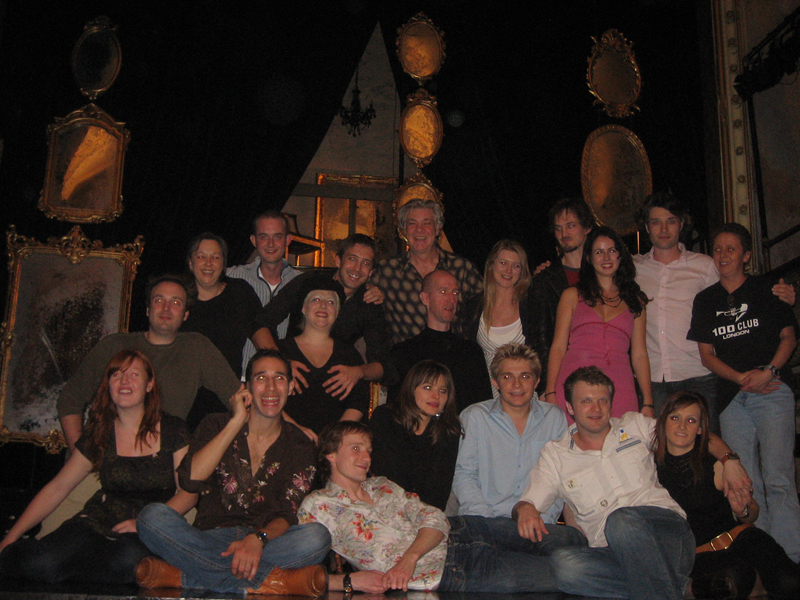 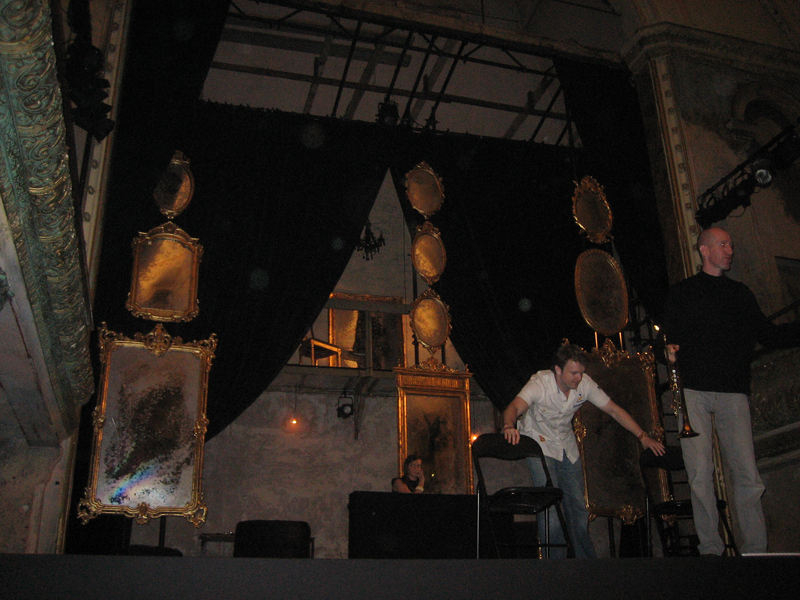 Director John Doyle also designed the show; ‘gorgeously furnished stage-all burnished mirrors like something out of the Sir John Soane Museum’. The tarnished mirrors hung on an invisible wall act as an extension of the Wilton’s balcony with its fading gilding, acknowledging the flawed personalities behind the sublime music. ‘Perhaps the intimacy of the auditorium – surely the space to see this production, regardless of its onward life – does its bit in gathering us into Salieri’s knotted emotional web, rather than encouraging the indulgences seen in this role elsewhere’ (Wolf).
Amadeus as a production shows Wilton’s finding its feet; less than two years after a change of management the still precarious hall is a popular and revered venue. The vibrant enthusiasm of the team producing a string of events and performances is clearly visible in the after show party images in the archive, of which I shall share only one. 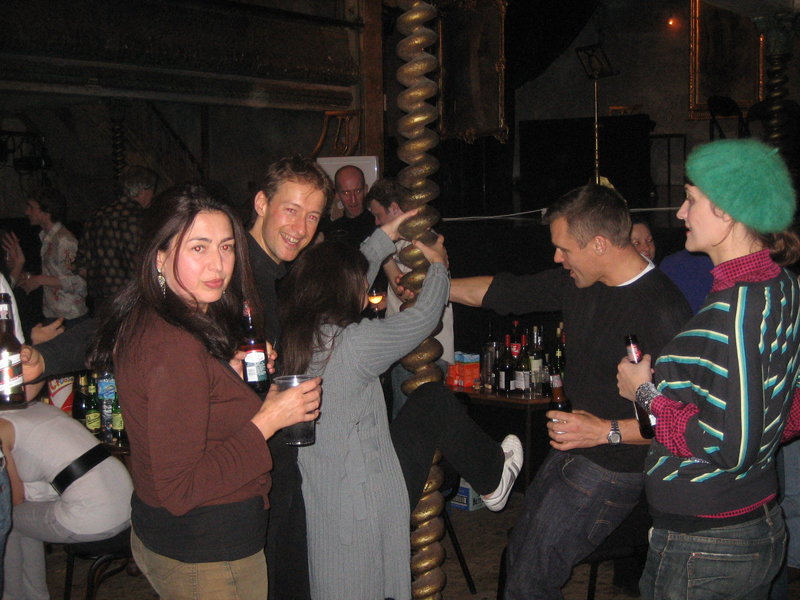 The atmospheric hall was a suitable match for the punk-classical piece, as was the genius of Mozart with that of Shaffer. 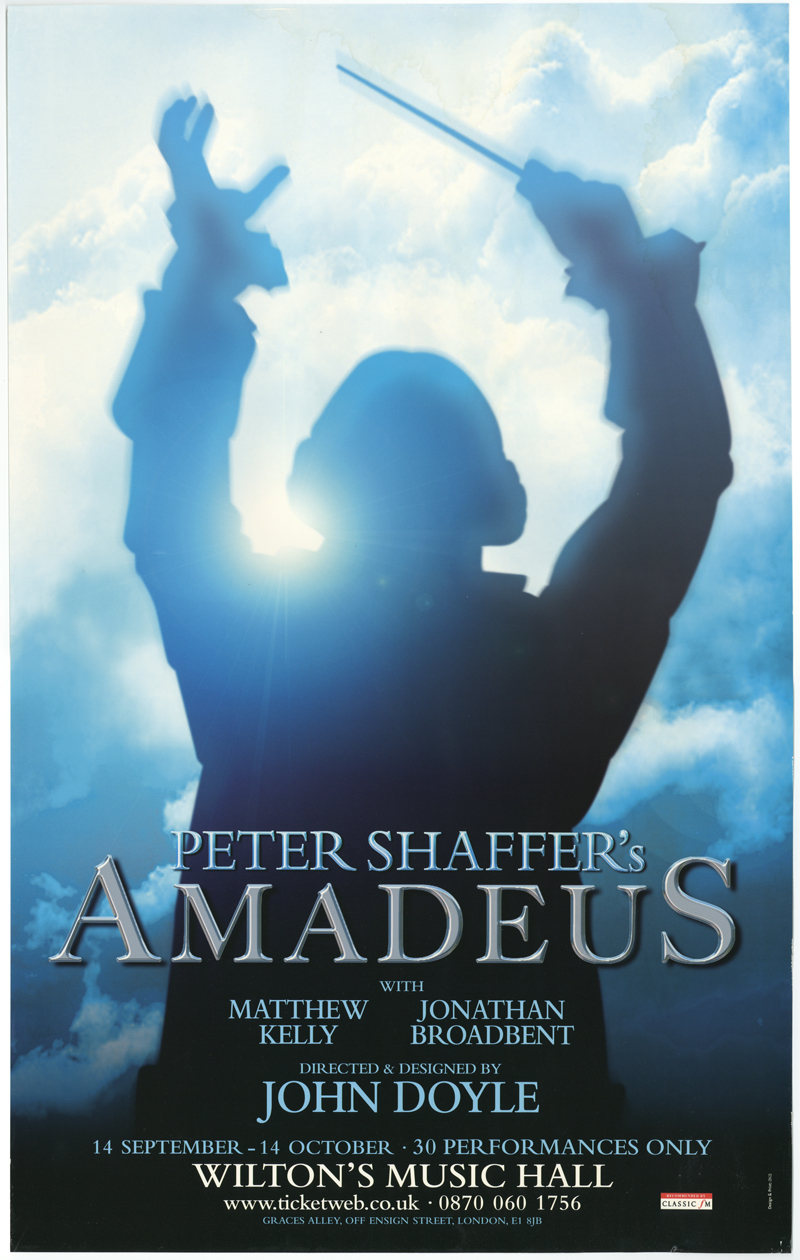