Find out about our past

Our Archive Uncover our history
"The most important surviving early music hall to be seen anywhere... It is of outstanding architectural and archaeological significance" – The Theatres Trust

Our history extends back to the 1690s. The buildings that now house our box office, bars, offices and rehearsal space began as houses, shops and a pub.

It was John Wilton who went on to build the Victorian Music Hall, as it now stands, in 1859 behind the row of buildings on Graces Alley.  Wilton's ambition was to provide West End glamour, comfort and first-rate entertainment for East End working people.

Since 1859 Wilton's has served as a music hall, a Methodist missions and today presents a programme of extraordinary theatre and music all year round.

Find out more about our fascinating past on this page or visit Wilton's for a guided tour. On the tour you'll also be able to enjoy our exhibition space, the John Wilton Room, which hosts a permanent display detailing our magical history and occasional exhibitions relating to our productions.

Wilton’s began life as five houses - 1 to 4 Graces Alley and 19 Wellclose Square. Originally built in the 1690s as individual houses, the buildings have had various alterations and reconstructions over the years including being combined by John Wilton in the 1860s. The largest house (1 Graces Alley) was an ale house dating from the first half of the 18th century, serving the Scandinavian sea captains and wealthy merchants who lived in neighbouring Wellclose Square. From c.1826, the ale house was also known as The Mahogany Bar, reputedly because the landlord was the first to install a mahogany bar and fittings in his pub. In 1839 a concert room was built behind the pub and the building's life as a venue began. In 1843 the ale house was licensed for a short time as The Albion Saloon - a saloon theatre, legally permitted to stage full-length plays. 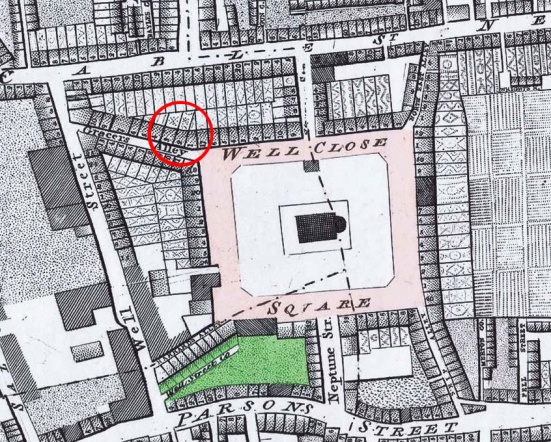 A section from Horwood's 1792 map with Wilton's site circled.

John Wilton bought the business in c.1850, building his first music hall in place of the previous concert room in 1853. He then replaced it with his ‘Magnificent New Music Hall’ in 1859. He furnished the hall with mirrors, chandeliers and decorative paintwork and installed the finest heating, lighting and ventilation systems of the day. Madrigals, glees and excerpts from opera were at first the most important part of the entertainment, along with the latest attractions from West End and provincial halls, circus, ballet and fairground.

By the early 1860s the first of the larger proto-variety theatres were being built in the West End. John Wilton may have spotted the  new trend, selling up early in 1868 and opening a West End restaurant. The music hall carried on under a number of different proprietors for another thirteen years. In 1877 a serious fire in the hall left just the four walls and the ten barley twist columns that still support the balcony. The hall was rebuilt and refurbished the following year but with hardly any change to the 1859 design. In 1881 Wilton’s Music Hall closed its doors, certainly as a respectable licensed music hall and possibly because the 1878 rebuild did not conform to fire regulations brought in that year. In the thirty years Wilton’s was a music hall, many of the best remembered acts of early popular entertainment performed there, from George Ware who wrote ‘The Boy I love is up in the Gallery’ to Arthur Lloyd and George Leybourne (Champagne Charlie), two of the first music hall stars to perform for royalty. 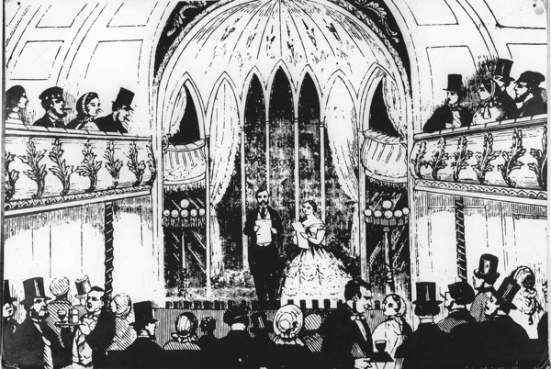 Towards the end of the 19th Century the East End had become notorious for extreme poverty and squalid living conditions. Religious organisations tried to help. In 1888 Wilton’s was bought by the East London Methodist Mission. The Methodists renamed the building ‘The Mahogany Bar Mission’ and for some time considered it ‘Methodism’s finest hall’. During the Great Dock Strike of 1889, a soup kitchen was set up at The Mahogany Bar, feeding a thousand meals a day to the starving dockers’ families.

The Mission remained open for nearly 70 years, through some of the most testing periods in East End history including the 1936 Mosley March and the London Blitz. Throughout that time the Methodists campaigned against social abuses, welcomed people of all creeds and ethnicity, and gave invaluable support to the local community, particularly the needy children of the area. 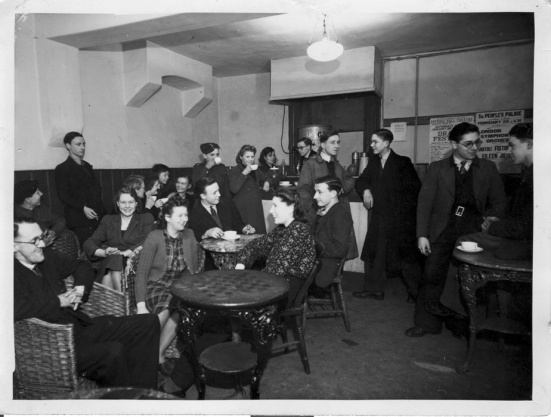 After heavy wartime bombing, many local businesses and residents left the East End. The Mahogany Bar congregation was much reduced and the Mission closed in 1956. The building was then used for several years by a rag sorting warehouse. In the early 1960s the London County Council drew up plans for demolition and redevelopment of the whole area between Cable Street and the Highway, Cannon Street Road and Ensign Street, including Wilton’s. A campaign was launched to save the building led by theatre historian John Earl who persuaded the poet John Betjeman and the newly formed British Music Hall Society to back the campaign. Earl and Betjeman spoke at a public meeting held in 1964 to hear objections to the demolitions and Wilton’s was spared. The Greater London Council (successor to the LCC) bought the building and agreed to leave it standing. 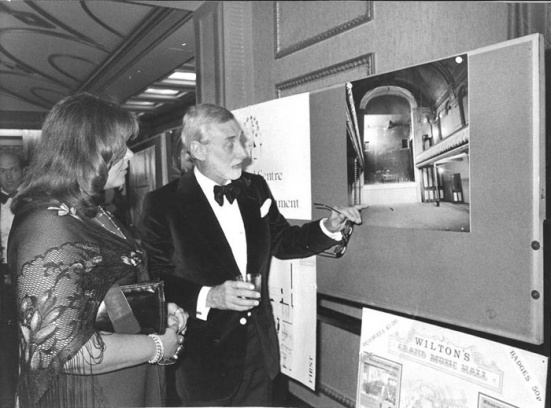 Spike Milligan at a fundraising event in 1975, photograph by Paul Smith

The building remained empty, suffering more structural damage and decay. However, the campaign to save Wilton’s gathered steam with articles in theatrical and variety journals and in 1970 Spike Milligan persuaded the BBC to produce The Handsomest Room in Town - a star-studded recreation of a night at Wilton’s Music Hall, filmed in the hall itself. The building was grade 2* listed in 1971 and in 1972 John Earl, together with Peter Honri, an actor and music hall historian, founded the first trust to raise funds to buy the lease.

A first phase of essential urgent repairs was completed in 1982 when the first charitable trust, The London Music Hall Trust, was formed. Further building work was carried out as funds became available between 1983 and 1989. The London Residual Body (formerly the LCC and GLC) gave the freehold of 1-4 Graces Alley to the London Music Hall Trust in 1986. They also gave 17 Wellclose Square, the house next door, which was then rebuilt and used as Wilton’s dressing rooms and kitchen.

Although these repairs took place, the building remained very far from safe and secure. 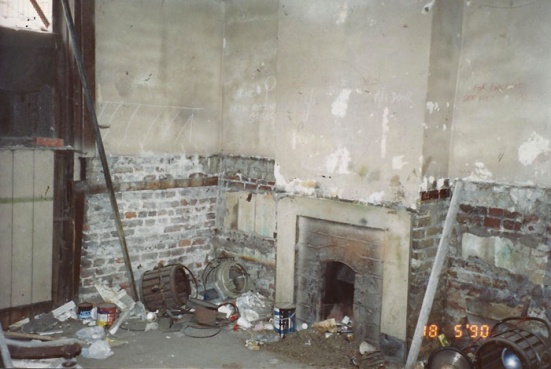 Although the building remained in a state of dereliction, artists began to make use of its undeniable atmosphere. The building was used for film and video shoots including Karel Reisz’s Isadora 1968, Richard Attenborough’s Chaplin 1992, Frankie Goes to Hollywood’s Relax 1984 and Annie Lennox’s No More I Love You’s 1995. In 1997 audiences were once again invited to see a performance, this time The Waste Land, performed by Fiona Shaw and directed by Deborah Warner. The production received rave reviews with many critics commenting on how suited Wilton’s was to the desolate mood of Eliot’s poem. In the middle of winter, the hall was unheated; the flyer said ‘please dress warmly’ and one journalist added ‘wear hard hats’.

In 1999, Broomhill Opera obtained the first artistic residency, opening Wilton's more regularly to the public. Their mission, under the artistic directorship of Mark Dornford-May, was to provide performance opportunities for talented young singers and musicians supported by celebrated opera directors, such as Jonathan Miller, Elijah Moshinsky and Netia Jones. They were based at Wilton's until 2004 when their work took them to become resident in South Africa. The Wilton’s Music Hall Trust was formed under the direction of former Artistic Director, Frances Mayhew, in late 2004, to fully open the building to the public, secure the ownership of the building and present a wider arts programme. 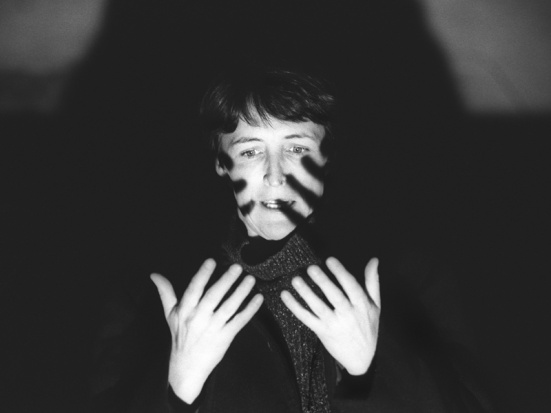 Over the next decade, Frances Mayhew, the Trustees and growing Wilton's team worked tirelessly to bring the building back to life, increasing audiences, creating a new artistic program and doing everything possible to stop the building falling down. In 2011 the large debt the trust had was paid off. Although restricted by problems left over from the previous years of dereliction, Wilton’s began to grow into a thriving arts and heritage venue. News of Wilton’s spread and it began to flourish, entertaining thousands of people each year through a programme of diverse arts.

Although Wilton’s was becoming increasingly popular with more and more people enjoying the building’s artistic program and unique atmosphere, it was still a building at risk. For decades, rooms had remained derelict and unsafe for public access and large areas had been subject to damp, rot, subsidence, crumbling walls, unsafe flooring, leaking roofs and failing brick and mortar. Fundraising for a Capital Project was launched to carry out all necessary repairs. This project would mean opening up previously unused spaces that made up 40% of the building, providing new opportunities for venue hire and a wider range of community and learning activities. 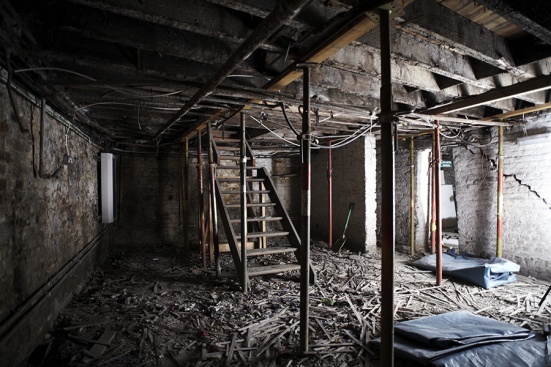 Saved, Revealed and Very Much Alive (2012 and beyond)

In 2012, thanks to generous donations from SITA Trust, the Foundation for Sport and the Arts and many other trusts and individuals, enough money was raised - just over a million pounds - to carry out part one of the Capital Project to repair the auditorium.

In 2013, with generous support of Heritage Lottery Fund and other donors, Wilton’s was able to raise the £2.6 million needed to begin part two of the project to repair the houses, numbers 1-4 Graces Alley and 17 Wellclose Square, which make up Wilton’s front of house. This also includes creating a new Learning and Participation Studio funded by the Aldgate and Allhallows Foundation. The project was completed in September 2015 when Wilton’s became structurally sound for the first time since the renovations of music hall days and after half a century of passionate campaigning.

In carrying out the building work, a policy of ‘conservative repair' has been followed which means ‘retaining genuine historic fabric and avoiding misleading restoration, so that future generations can interpret the significance for themselves in their own way, based on the physical evidence’. The work has been lovingly carried out by Fullers (Phase 1 - the Auditorium) and William Anelay (Phase 2 - the Front of House) under the careful direction of Tim Ronalds Architects, EC Harris, Bristow Johnson, Cambridge Architectural Research, Max Fordham, All Clear Designs, Ramboll UK, Carr and Angier and Wilton's staff.

Photo by Hélène Binet
Supported by: