Following their triumphant exploration of Beethoven with Beethoven Begins in 2013, the Kreutzer Quartet return with three concerts based around Beethoven's 'middle period’ works - presenting works of astonishing brilliance and depth by Beethoven, balanced with premieres from Britain's leading composers.

The first concert of this series explored the relationship between Beethoven’s quartet and piano writing. For this second, the Kreutzer Quartet will look at Beethoven's Op 74 Quartet - a composition which uses the whole ensemble to imitate the harp, an instrument Beethoven famously disliked. Alongside this, the Kreutzers are proud to bring Robin Holloway’s music to Wilton’s for the first time and a new set of preludes by David Matthews. Robin Holloway is one of the UK’s most influential composers and musical thinkers and his exciting quartet is the perfect foil for Beethoven.

The members of the pioneering Kreutzer Quartet are the dedicatees of countless new works by composers including Michael Finnissy, David Matthews and many more. They have many successful recordings including music by Matthews, Elliott Schwartz, Michael Tippett, Roberto Gerhard and Jeremy Dale Roberts to name just a few. Individually, all four members are renowned as soloists and composer. Although the quartet is in demand at major festivals from the Venice Biennale to the Bergen Festpillerne, they have relished the opportunity to work in Wilton's wonderful acoustic and over the last few years have developed an eclectic programming style in response to this unique venue. 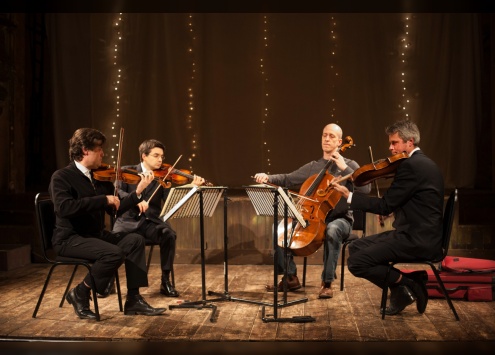 Following their triumphant exploration of Beethoven with Beethoven Begins in 2013, the Kreutzer Quartet return with three concerts based around Beethoven's 'middle period’ works. Conc...