2nd February to 16th February . 7:30pm .
Tickets £10 - £20
Get 20% off when you buy a ticket for a chamber concert alongside a ticket for The Depraved Appetite of Tarrare the Freak

Tom Poster, composer of The Depraved Appetite of Tarrare the Freak, is also an internationally celebrated pianist with a passion for creative programming, and has devised a series of three contrasting concerts to run alongside Tarrare, each drawing on themes from the opera.
Thursday 2nd February
FRENCH CONNECTIONS
The opening concert of the series brings together four renowned soloists, as cellist Sheku Kanneh-Mason, current holder of the BBC Young Musician of the Year title, joins 2006 BBC Young Musician winner Mark Simpson (clarinet), recent BBC New Generation Artist Elena Urioste (violin) and series Artistic Director Tom Poster (piano) in an all-French programme which nods to Tarrare's Parisian setting. Opening with a solo piece and growing via duo and trio, the concert culminates in Messiaen's powerfully transcendent, iconic masterpiece, Quartet for the End of Time, written and premiered in a German prisoner-of-war camp in 1941 and containing some of the most ecstatic music ever written.
Mark Simpson (clarinet)
Elena Urioste (violin)
Sheku Kanneh-Mason (cello)
Tom Poster (piano)
Ravel          Pavane pour une infante défunte for solo piano
Debussy     Première rhapsodie for clarinet and piano
Fauré          Piano Trio in D minor
INTERVAL
Messiaen    Quartet for the End of Time
Thursday 9th February
A COLE PORTER SONGBOOK
Two singers from contrasting vocal traditions - British baritone Ronan Collett, a former BBC New Generation Artist and currently a member of Oper Stuttgart's solo ensemble, and award-winning German jazz singer and composer Winnie Brückner - join Tom Poster in a cabaret-inspired evening, already heard to great acclaim in Germany and the UK, celebrating Cole Porter's masterly songs. The performers' own arrangements - a mixture of solos, duets and trios - draw on an eclectic range of styles and explore Porter's songs from a multitude of angles, while always staying true to the heart and soul of these timeless melodies.
Winnie Brückner (vocalist)
Ronan Collett (baritone)
Tom Poster (piano)
Cole Porter   Songs including I've Got You Under My Skin, My Heart Belongs to Daddy, Miss Otis Regrets, So in Love, Begin the Beguine, All of You and Every Time We Say Goodbye
Thursday 16th February
LIGHT AND SHADOWS
Tom Poster has been described as "a marvel, who can play anything in any style" (The Herald) and as having "a beautiful tone that you can sink into like a pile of cushions" (BBC Music). He concludes the series with an intimate solo piano recital centring around the theme of storytelling and exploring contrasts of light and shadow. Schumann's enchanted Forest Scenes are framed by Ravel's depiction of the sinister, sensuous water-sprite Ondine, three contrasting takes on Gershwin songs, and perennial favourites by Schubert and Chopin.
Tom Poster (piano)
Schubert      Four Impromptus, D. 899
Schumann   Waldszenen (Forest Scenes)
INTERVAL
Ravel           Ondine from Gaspard de la nuit
Gershwin     Songs (transcribed by Earl Wild, Michael Finnissy and TomPoster)
Chopin         Ballades Nos. 3 and 4

Wattle & Daub Present
The Depraved Appetite of Tarrare the Freak 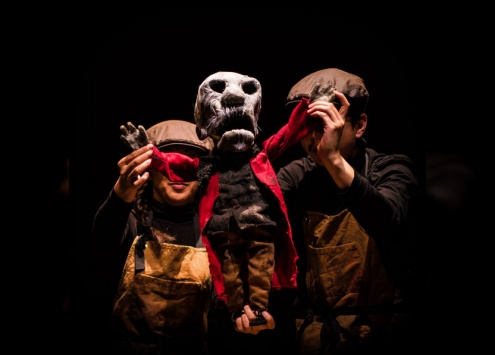 Get 20% off when you buy a ticket alongside a ticket for one of the Tom Poster and Friends Chamber Concerts.“Genius” ★★★★ Exeunt"The history of this monster is as curious as his ...